Lesson 1: Why should I care about solid state analysis?

Solid state analysis – which is also known as particle analysis/powder analysis is essential in order to understand and control your drug during development.

Lack of control of the particles in a drug substance increases the risk of sudden transformations leading to changes in the stability and properties of the compound: Such changes might have large consequences for the behaviour of the compound during manufacturing and -ultimately- in vivo. I.e. the potential risk if the particles are not in control is that the analytical program (where the stability is tested) and the clinical studies (where the drug is given to humans) have to be repeated, which of course is quite costly. 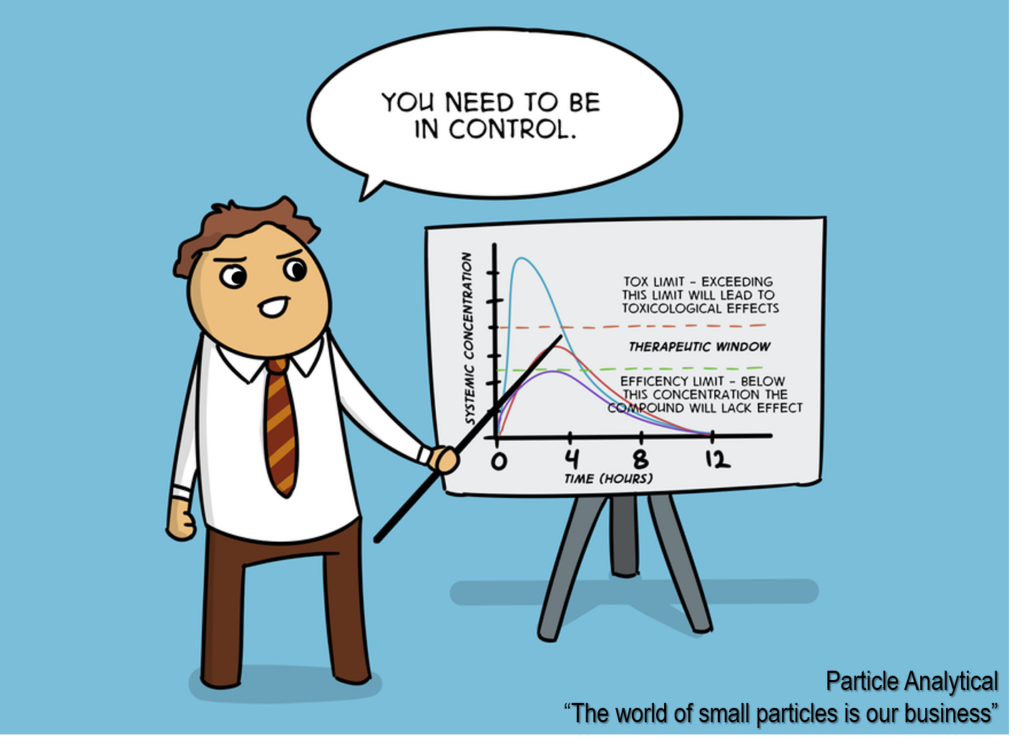 Lesson 2: What is a crystal?

Diamond and graphite (as in a pencil) are different crystal forms of the same material (carbon). The only difference between these two materials is that carbon, on the molecular level, is bound to the neighbors differently! The stronger the interconnection between the neighbors is, the harder it is to separate them from each other. 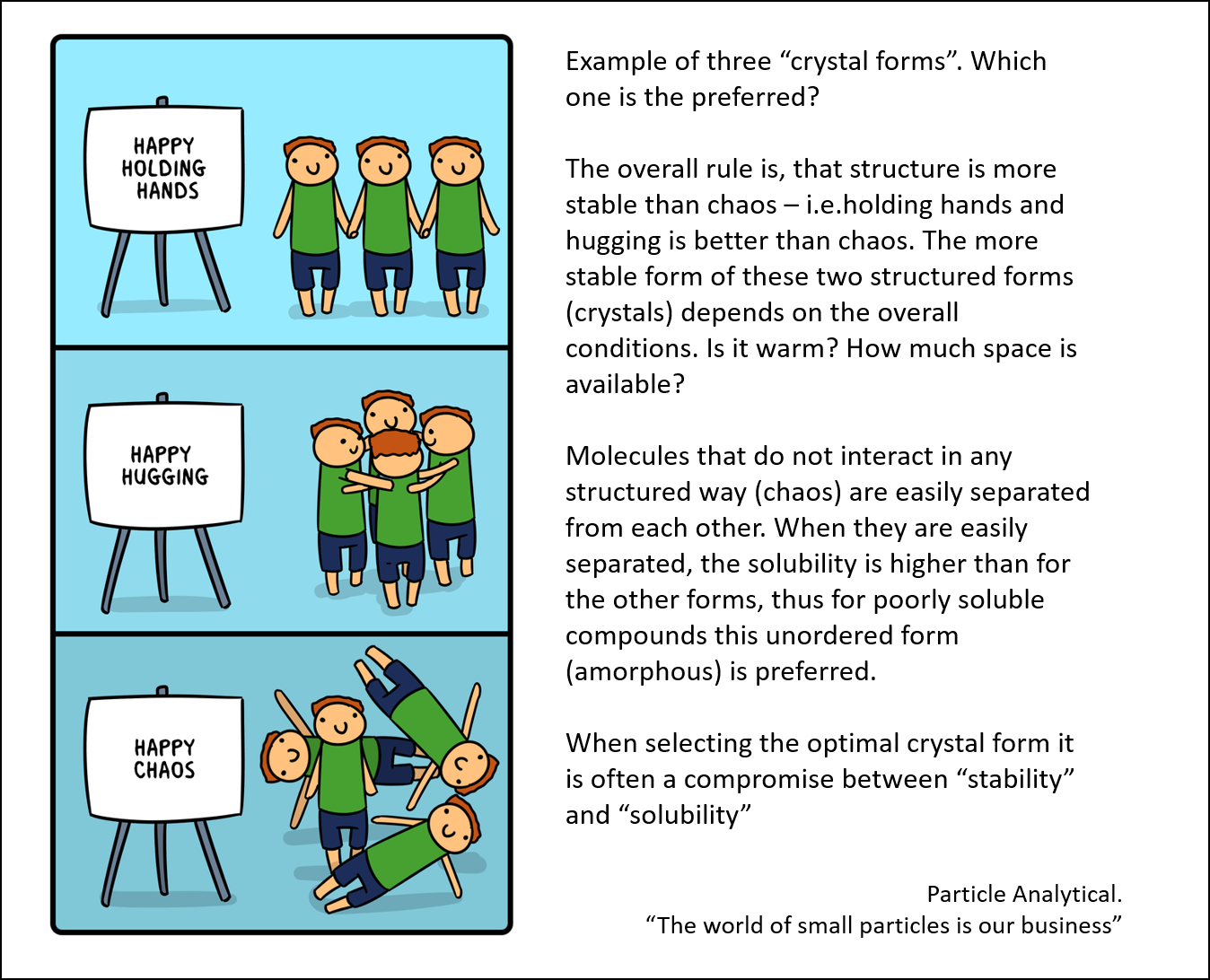 Depending on what the material have been exposed to, when it was created, different ways of arranging the molecules are “chosen”. Just like people on the bus: If there is plenty of space, everyone sits in a relaxed position on the seats – however, on a crowded (rainy) day, people stand up, very close to each other.

For all material, the same law applies: At a given temperature and pressure, one form is more favorable than the others – thus over time, all other forms will transform into the more stable form. Translating it into the “bus situation”: When the pressure decreases, people prefer to sit on the seats.

This is also the case for the carbon molecules in graphite and diamond, where graphite is actually the stable form: If you wait long enough, diamonds will turn into graphite (…in thousands of years). For drug molecules the same is the case: It is usually preferred to use the most stable form – but the less stable form might be just fine, as the stability of the “less stable” form might be more than enough for the purpose. In many cases, the “most stable form” has a lower solubility and might be less suited as a drug, thus in these cases you want to avoid using this form.

Lesson 3: How do I know if my material is actually crystalline?

It is not enough to look at the particles, as crystallinity can usually not be detected visually. The most widely used method for determination of crystallinity is x-ray powder diffraction (XRD). When exposing you material to x-rays , you will only obtain a “signal” if the material is ordered in crystals. Thus, if there is no internal order (referred to as amorphous), the diffractogram (which is the outcome of the XRD measurement) will reveal an “increase in baseline”. Only if the material is crystalline, peaks will appear.

All crystalline forms have a unique pattern, so different crystalline forms can be distinguished from each other. Thus, for identification of crystalline material, XRD is perfect. However, for quantitative purpose, i.e if you want to know the “degree of crystallinity”, more effort has to made, as a standard measurement on XRD does not give information about amounts. It is of course possible, but other methods might be even more useful. These methods includes FTIR, DVS (dynamic vapor sorption) and DSC (differential scanning calorimetry)

Lesson 4: What about particle sizes?

In the previous lessons the focus was on the crystallinity of the particles. However, another very important property in regard to controlling a drug is the particle size. In the final tablet (which is the most common final form of a drug product), all the ingredients have been compressed in order to obtain a nice and smooth surface. However, the tablets are made up of a large number of small particles – and the size of these particles are very relevant for stability and solubility.

It is easy to understand that the size of the particles have a large influence on the solubility: Small particles will have “more contact” with the surrounding water and thus be dissolved faster than larger particles. Also, the particle size might influence the stability – again due to the accessible to the surface: Smaller particles will have “increased” interactions with the other ingredients in the tablet, which mig lead to a faster degradation.

However, determination of particle sizes are not as easy as one might think, as they cannot be determined like, for instance, cubes, where the individual parameters are easily measured (1mm*2mm*6mm). Real particles are of various shapes and not one dimension can be used to describe the size (read more) 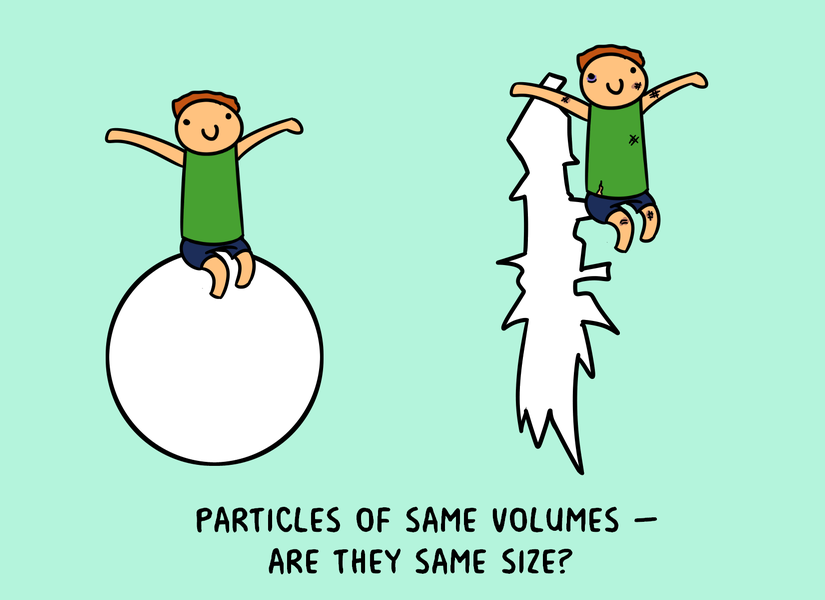